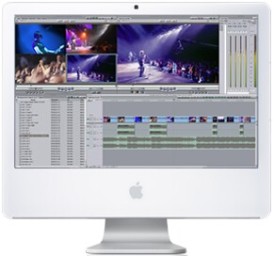 Well, after years of talking about it and experimenting with it, I’ve taken the plunge into the Apple world. I definitely think Macs are here to stay and from what I’ve seen, will grow ever more popular. Now I’m not going to get on a Microsoft bashing festival or anything but after years of Windows, I just want more..or less.

So I’ve been evaluating Windows Vista Ultimate for the last four or so months and I’ve come to a simple conclusion. There is absolutely nothing that I’ve found in Vista that I would need that was not already in XP, or could be done on a Mac. Vista has DirectX 10, but so what, I’m not a gamer. No value there. Now all OS’s have their moments, Mac included, but these last four months with Vista were just buggy. Explorer hangups and the like.

What I want is that when I turn on my machine, it boots up and runs. When I shut it down, I want it to shut down. When I’m using it, I want it to be usable and simple. Oh, the other main point, I just want to be a user of a computer now, not an operator or administrator. I shouldn’t have to perform admin like tasks to use a system. I feel that with Vista, Microsoft put so much effort into the eye candy and their concept of usability, that’s it’s just not an enjoyable experience.

So now on to the Mac. My first thing was to ask myself what exactly do I do with my computer? What apps do I run? And what cannot run on the Mac? With having Core2 Duos in my Macs, I have enough horsepower to run XP on Parallels for those apps that are not made for Macs. Mainly, Newsleecher and Microsoft Onenote. My other app is Picasa, but I’ll try iPhoto.

Notice that I said Macs, yes, bought two. A Macbook Pro 15" for myself and the 24" iMac for the family. It pretty much comes complete with everything and well integrated. For myself, my Macbook is were I will be moving my life to, work and personal. Because my professional field is storage networking, specifically in engineering, I’ve got the Macbook Pro’s Unix underlying which integrates for work. And the personal side of life, I have Garage Band. I’m a drummer and Garage Band allows me to create music tracks for me to play along with, no need to buy any more play-along CD’s. Just mix, save as mp3, and drop into iTunes/iPod. Perfect.

With the built-in iSight, I’m at work, the family is at home, and we can chat with video, kids love that. Since we home school, it’s the best way for me to check in with them, especially with a math question.

Oh, photos. So I have a Fuji S5200 camera that I shoot lots of photos with. I plug it into Vista, I need to download a driver from Fuji for it to see it, which won’t install properly. But Iget the pictures off anyway. Now here’s the funny thing. I know of a friend that installed OSX on a Dell GX620 so I connect my camera to his "iDell" and it just worked…just worked….just worked….

So, Apple World, here we are. As far as my Vista workstation, yeah, after the move, I’m wiping it and putting Linux back on it to dork around on when I have a geek relapse.