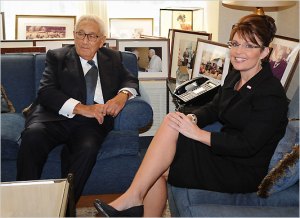 I just had this vision of Eddie Murphy as Buckwheat reading a bedtime story to children titled, “Palin Goes to the City”. Please SNL, bring back Eddie just to do that skit. And then another skit of Tina Fey playing Palin sitting at a school desk with just the teacher learning where the other major countries are. “No, No, this is Canada, not eastern Alaska” as he points over Calgary.

But anyway, Mrs. Palin is venturing to the big city, to go in a big building, with a lot of important people. What do you think she will do, children? Will she piss of the world community? Will she talk about her bridge to nowhere that she turned down? How about family values and starting families early.

BTW, Sarah, call me if you need directions to the U.N., even I’ve been there before. Oh, add that to my list of why I’m more qualified than you (see earlier post). Â Add oddly enough, for some strange reason, the media was kept away as much as possible. For a V.P. candidate that is qualified to step in as president, they sure keep her under wraps, don’t they? I can’t wait for the VP debates. I’m actually looking forward to that more than Obama/McBush.

Talking Georgia With Kissinger | 4 p.m. Gov. Sarah Palin wrapped her first day of motorcade diplomacy with a 90-minute meeting with Henry Kissinger, where they spoke about Georgia.

Ms. Palin and Mr. Kissinger sat on blue couches, separated by an end table with photographs of President Nixon and President Reagan on it. As photographers were led in, Mr. Kissinger could be heard saying that he gave someone â€œa lot of credit for what he did in Georgia,â€ according to a reporter who was allowed to watch.

The photographers were ushered out. When Ms. Palin emerged from the building, a news producer asked her how it went, and she mouthed the words, â€œIt was great.â€

Palin in the City – The Caucus Blog – NYTimes.com.