Man, I’m just unraveling here. Not paying attention. This past weekend was a South River anchoring kind of weekend. It’s a good thing I left late as some friends were out of ice, so no mixed drinks. But as it seems, they were fine, they just drank words of wine till I got there. Now thinking about anchoring and reflecting on Cape lookout, South River had light winds out of the east and I anchored in 8ft of water. But I “dumped it all”, the chain that is so I had about a 12 to 1 scope 😉    Which brings another issue, I need a wash down pump.

So all is well, dinner, drinks and friends. What could go wrong? I’m headed out the next morning back to Oriental motor-sailing out of South river and the engine slowly dies. It’s not the sound you like to hear. The way it died led me to one of two things, clogged fuel filter or worse, fuel pump died. It’s one of those two, has to be. the notion that the tank was empty didn’t cross my mind till I looked at the tank directly. But the darn fuel gauge still read 3/4 full. Obviously, it’s not working. Now usually I’m always topping off the tank before headed out on a long trip but to South River? Didn’t even think of it. I must have used more fuel than I thought going to Ocracoke, Cape Lookout and day sailing throughout the summer than I thought. Just slipped my. mind.

So called BoatUS and put up full sails headed back to Oriental doing about 3kts. It is a sailboat after all. Powerboats, take note. And as I’m sailing back, here comes this fog rolling in across the Neuse reminding me of Steven King’s novel, The Mist. What else could possibly happen, weird creatures flying out of the fog?

Well, BoatUS met me between Garbacon Shoal and Oriental #1 and brought some diesel. Now, I’m glad I went to the Yanmar three day class where I learned the idea of adding a primer squeeze build inline before the Racor filter. Much easier to prime a diesel after running our gas, not having to press that little lever dozen of time to get full flow.

So got back to the slip and promptly went to Waterstreet Grille for breakfast. After the morning incident, nothing better than a good omelet. So to counter balance the bad karma morning, decided on blessing the day with good fortune by heading back out with friends for a great afternoon sail. The winds were nice out f the north between 15 and 20kts. Made for a perfect day. As I single hand a lot, thanks to Richard and Lisa for joining, I was a passenger the whole afternoon. 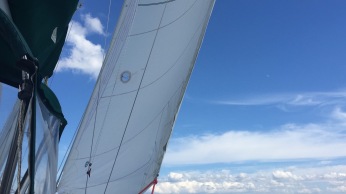 And thanks to Richard for putting up with my Crablegs addiction as we stopped at MJ’s Raw bar in New Bern on the way home. Did some good damage. Definitely going to be a regular stop. Great weekend.