Fourth of July weekend and the Croaker Festival, another fantastic weekend of events. Was in Oriental for the day parade on Saturday then the fireworks from the bridge at night. Caught the parade from my usual VIP spot, the porch at The Bean. Then it happened. The NSA float came by to which I got assaulted with fast flying, hard candy. Everyone ran for cover as I was squarely in their sights. They almost took an eye out. Then lunch at the newly opened O-Town, Chris Daniels definitely got it going on. 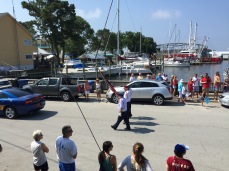 So not being content with remaining on land and realizing that Monday is a holiday, the impromptu decision was made to go to Cape Lookout. We told Paul and Becky and they were in like Flynn. Bruce and Kay quickly jumped on the idea so we all set sail Sunday morning to the cape. Amanda and Miah were already there for a few days so we would all meet up. There’s something about that turquoise blue water when your out in the Atlantic ocean that’s so beautiful.

Well of course, you know it’s not a Tony Nelson trip without a Tony Nelson type of event happening. So as we’re coming into the Cape (I’ll skip the details of a big roller coming from the starboard side, rolling Nancy off the seat and completely taking out the throttle) we had throttle issues. Apparently, the throttle cable somehow ripped out the control arm on the engine. Took a couple of minuted to figure everything out and what to do as we sat drifting. We still had control of the transmission and that engaged. Nancy had to go below and manually much the control arm on the engine so we could move. She’s a trooper. Well, after that we got safely anchored albeit a bit close to these Canadians (more on that later).

So apparently there’s an unwritten rule that the last boat in ends up being the host. As soon as we were anchored and we cut the engine, dinghys defended upon us bring strange beverages and foods. To protect the innocent, I’ll skip those details and simply say that it was a fantastic time. 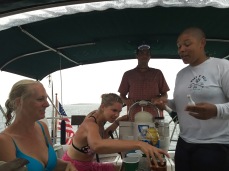 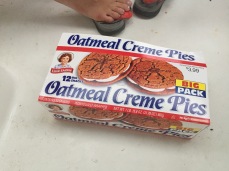 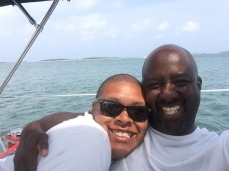 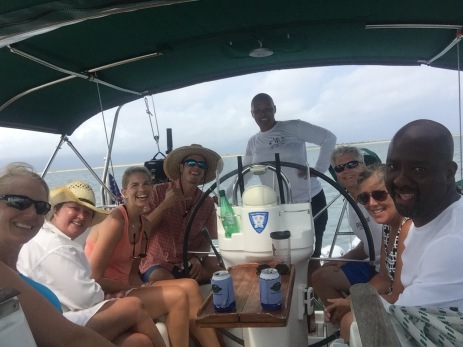 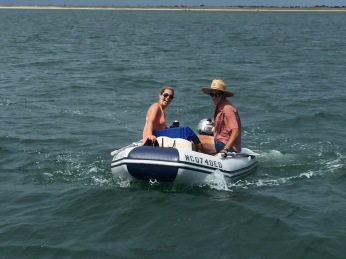 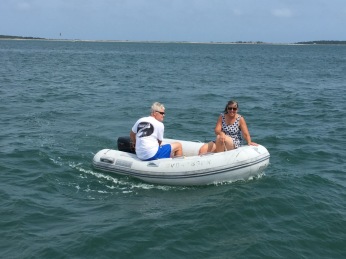 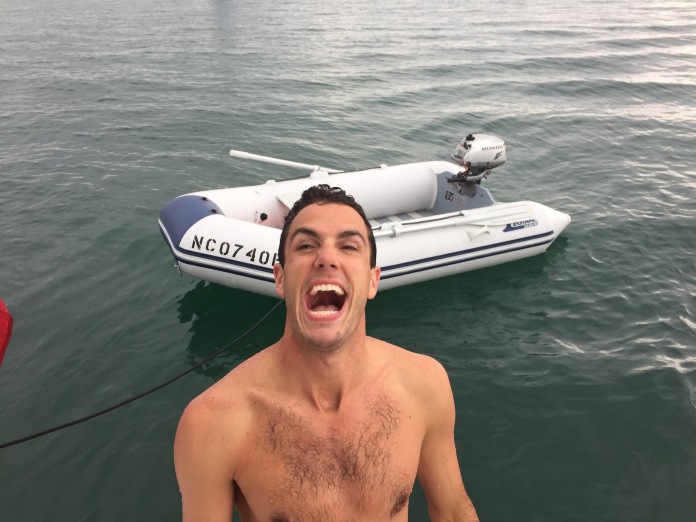 So I think the excessive partying and yelling and overall antics pissed off the Canadians that were anchored near us. We successfully did what no other people on the planet have ever done, piss off Canadians. Because the next morning, they just pulled up anchor and took off. Never looked over at us, no wave goodbye, nothing. We did feel bad, maybe we were a tad bit rowdy? Nah, we stopped before it was dark. The next morning coffee was needed as we watched the sunrise and said our goodbyes to our Canadian neighbors. 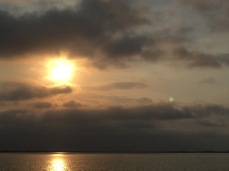 If we wanted to catch the tide going in to Beaufort Inlet, we really should have left early in the morning. We all decided to stay for a while and enjoy part of the day, leaving at noon. So we had breakfast, went over to the lighthouse (which was closed on the 4th of July, go figure so couldn’t climb), walked through the park and hung out there for a while. 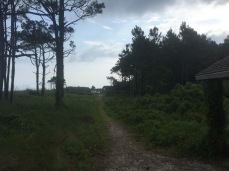 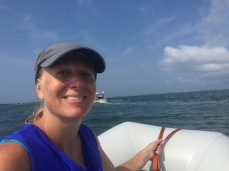 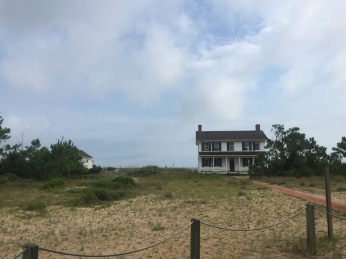 Still not being ready to leave, it was time to head over to the beach. Both beaches, inside the cape and walked over to the Atlantic side. To the right of us, a few people walking, to the left, not a soul in sight. BTW, did I mention that I totally LOVE the new AB 9.5AL dinghy with the new Tohatsu 9.8? Way, way much better than the previous two dinghies with inflatable floors and a 6hp motor….just saying’.

Pure tranquility but it was soon time to go, pull up anchor, head out into the Atlantic then in the inlet and up the creek back to Oriental. Oh, but couldn’t end that great weekend without this…..