Just realized that this post has been in draft status for over a year, how did I miss that? Anyway, my original post on cable cutting from Sept. 2013. We did go into relapse after a month and got TWC after AT&T U-Verse, mainly because I switched to TWC for greater download speeds and added cable to the package. But that lasted about a month or so, so officially, we’ve been cable cutters for a little over a year. Look for an update to how we’re doing. Spoiler alert, doing real good.

Well, we finally cut the cord and it was long overdue. It was an interesting set of events that caused it. We’ve been thinking of it for some time now, and last Monday, AT&T made the decision easy. Maybe it was just timing or divine intervention, but their DVR box crapped out, right around the time I received an email notification that our new online bill is ready. Really…. 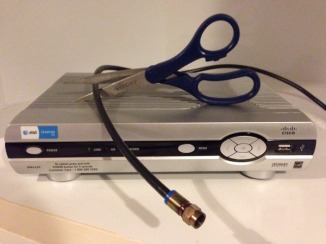 So why cut the cord? In short, value. Or not enough value in their offerings. I findit absurd to pay for hundreds of channels that I don’t watch, just to gain access to a few HD channels that I’m interested in.
We’re able to get what we want with Netflix streaming, Hulu Plus and Amazon Instant Prime, all for a fraction of the cost. We have a Roku box in the theater and an AppleTV in the family room. In addition, we’re doing over-the-air broadcasts. Now there are some things that I’m saying goodbye to, such as ESPN and Monday Night Football, but oh well, not worth the cable cost to me. If ESPN chooses to provide their programming directly without a cable subscription, good, otherwise, see ya’.

Frankly, I just don’t like feeling and being treated as a mindless consumer, where a company can just peddle their wares with no real value, and expect people to line up and pay for it. Now I doubt that AT&T U-Verse or TWC will change their business model on account of me, after all I’m just one customer.